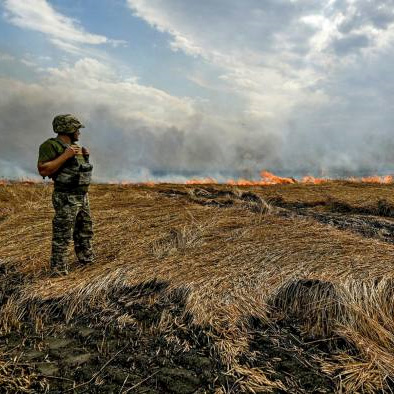 Supply chain disruptions, a pandemic, extreme weather and now a war in Ukraine have exposed faultlines in the global food system that we ignore at our peril. The crisis demands nothing less than a complete transformation of agrifood — one that involves diversifying the crops we grow, the way we grow them and how we transport them.

Climate change threatens almost everything when it comes to our food. More than 40 per cent of wheat on America’s great plains is suffering from drought. In China, floods mean wheat yields this year will be among the poorest ever. In May, India registered record temperatures of 49C. Right now, much of Europe is in the grip of a deadly heatwave.

The war in Ukraine is yet another disruption to a vulnerable system. Together, Russia and Ukraine supply 28 per cent of globally traded wheat, 29 per cent of barley, 15 per cent of maize and 75 per cent of the sunflower seeds that account for 11.5 per cent of the vegetable oil market. Russia is also the world’s biggest exporter of nitrogen fertiliser, the second of potash and third of phosphorous and a major source of the energy that fuels global agriculture.

Essentially, we now have a “fossil food” system in which a few staple crops grown in a few exporting countries are transported to distant consumers around the world using fossil fuels at each stage from plough to plate.

So, what should we do? To date, our response has been “business-as-usual” as importing countries scramble to find alternative sources of staple crops such as wheat from Ukraine and Russia. However, to protect their food security, 23 countries, including India, have imposed restrictions on wheat exports and other foodstuffs. More will follow.

Doubling down on mainstream staples will become an increasingly bad investment — if we are struggling to feed a global population of 7.8bn people, how can we nourish a predicted 10bn by 2050 on a hotter planet?

In short, we must change from a fossil food system into a future foods one. This must include climate-resilient and nutritious “forgotten” crops, as well as diverse farming systems that have been displaced by industrial monocultures of energy- and fertiliser-hungry staples.

Man has cultivated around 7,000 plant species as crops. Of these, just three — (wheat, rice and maize) now provide over 60 per cent of the human diet. We use 10 per cent of these crops and 18 per cent of vegetable oils for biofuels — equivalent to the food needs of 1.9bn people. In 2021 China imported 28mn tonnes of maize to feed pigs and over 40 per cent of the wheat grown in the EU and 33 per cent in the US was fed to cows. We must stop feeding food crops to animals and engines.

We must also diversify farming systems and include landscapes, urban spaces, common land and even gardens as food sources. Diverse systems provide greater resilience to extreme climates than regimented monocultures as well as potential livelihoods for a new generation of farmers.

Finally, we need to embrace food as a source of cultural value, nutrition and even joy — not just a means of sustenance and source of profits. The Global Manifesto on Forgotten Foods, launched in 2021, calls for a plan of action in which forgotten foods, from climate-resilient and nutritious crops such as fonio and bambara groundnut, can become agents of transformation. We must rediscover local, nutritious and diverse foods and reduce our addiction to a monotonous diet of uniform, ultraprocessed products that are transported around the world.

This requires vision, investment, a scientific knowledge base and farmers as innovation partners, not passive recipients of new technologies. In growing forgotten crops in a changing climate it is they, not us, who are the experts. Producers and consumers, not companies, must lead the urgent rethink of the food system for the good of humanity and the planet.

This item is a shortened version of a Financial Times article by Prof. Sayed Azam-Ali, CEO Crops for the Future. You can find the full article here