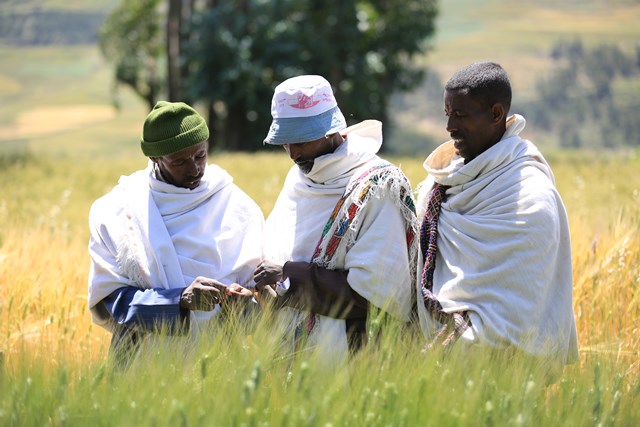 Utuba is capturing the affections of Ethiopian farmers. The variety, which offers a staggering 1 t/ha advantage over the most recently released bread wheat cultivars such as Ude and Mangudo, is putting smiles on faces in many households in Ethiopia.

Africa RISING tested Utuba in six kebeles (wards/neighbourhoods) – two each in Amhara, Oromia and Southern regions. Across the sites, the average yield for Utuba was 4.7 t/ha compared with 3.0 t/ha for Ude and 3.8 t/ha for Mangudo. This success builds on years of advanced breeding work by ICARDA and the Ethiopian Institute of Agricultural Research.

In 2015, farmers’ field days in the Bale Highlands showcased the new ‘wonder wheat’ and farmers purchased more than 11.5 t of Utuba seed. Utuba has several advantages that make it attractive to farmers. Its great tillering capacity, producing more spikes and therefore higher yield, is the trait that growers appreciate most. The extra stems give more straw, which is used to feed livestock – a major benefit for smallholder farmers. Early heading avoids damaging effects of the terminal drought and desiccating winds that can happen towards the end of the growing season. And its high level of resistance to rust is one of the most visually compelling decision points for growers – farmers near Bale saw their neighbours’ bread wheat fields completely wiped out by stem rust, but with Utuba even the worst rust infections affected only 5% of the stem.