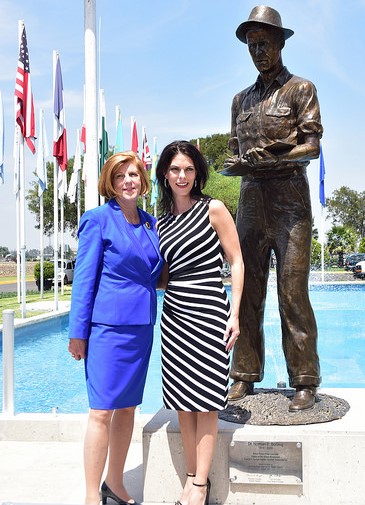 These hunger fighters must embrace technological innovation, creativity, bold ideas  and collaborate across all disciplines, while also effectively engaging smallholder farmers and private and public sectors to come up with sustainable solutions, Borlaug said, adding that the average age of a farmer in the United States and Africa is well over 50 years.

Julie Borlaug, the granddaughter of 1970 Nobel Peace Prize laureate Norman Borlaug, a former key wheat breeder at the International Maize and Wheat Improvement Center (CIMMYT) known internationally as the father of the Green Revolution, will address delegates at the CIMMYT 50th anniversary conference on September 27, 2016 with a speech titled, “CIMMYT’s future as a Borlaug legacy.”

After 50 years, CIMMYT remains relevant in the fight for food security and an important part of the Borlaug legacy, Borlaug said, adding that technological innovation is needed to address agriculture and the challenge of climate change.

“Since the seven years of his passing, I know my grandfather would be pleased by the leadership team and all at CIMMYT. As hunger fighters and the next generation, they have made CIMMYT their institution and continue to advocate strongly for improvement in science and technology to feed the world,” she said.

Her grandfather, who started work on wheat improvement in the mid-1940s in Mexico, where CIMMYT is headquartered near Mexico City, led efforts to develop semi-dwarf wheat varieties in the mid-20th century that helped save more than 1 billion lives in Pakistan, India and other areas of the developing world. In his Nobel Peace Prize acceptance speech, Norman Borlaug paid tribute to the “army of hunger fighters” with whom he had worked.

To read the interview, click here for the full article.

This news item is an excerpt from an article by Matthew O’Leary, part of a Partner Spotlight on CIMMYT (3-7 October) on the occasion of CIMMYT's 50th Anniversary.

Each week, the GFAR Secretariat is turning the spotlight on the work and collective actions of Partners in GFAR who share in our mission to strengthen and transform agri-food research and innovation systems globally. For more information on the Partners in GFAR, and to become a Partner, click here!

Photo: Julie Borlaug (R) stands with her mother, Jeannie Laube Borlaug, beside a statue of her grandfather Norman Borlaug at the Mexico headquarters of the International Maize and Wheat Improvement Center in El Batan. CIMMYT/Marcelo Ortiz