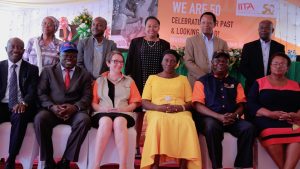 The International Institute of Tropical Agriculture (IITA), which is turning 50 this year, has vowed to redouble its efforts to transform Africa’s agriculture in the Eastern Africa region.

This was expressed by IITA Director for Eastern Africa Dr Victor Manyong at a ceremony organized at the Institute’s Eastern Africa hub offices in Dar es Salaam, Tanzania, recently to mark its 50th anniversary.

Dr Manyong assured guests at the event who included partners, beneficiaries, and staff from the three East African countries of Kenya, Tanzania, and Uganda, of IITA’s renewed commitment to continue supporting smallholder farmers in Africa.

He said while the 50th anniversary was a time to celebrate IITA’s achievements, it was also time to critically reflect on its future role and areas of focus in the region. He pointed out the many challenges still facing the agriculture sector in Eastern Africa that IITA was going to continue to address working through various partners.

“The population in Eastern African is increasing rapidly. It has more than doubled between 1990 and 2015 in the three major countries where IITA has research bases: Kenya, Tanzania, and Uganda. The proportion of the urban population is also on the increase with Tanzania reaching more than 30% in 2015 while it was below 20% in 1990. It is projected that its urban population will jump to above 50% by 2050.

He noted food imports and malnutrition as other major areas of concern in the continent. Africa is spending more than US$35 billion per year on food imports; malnutrition is also widespread: between 26 and 38% of children in the region were found to be stunted between 2010 and 2015 although these figures are 5% lower than those in the previous period.

“With these trends, the collective goal therefore should be to achieve rural transformation in Eastern African. We need strategies that efficiently put under control biotic and abiotic stresses that continue to hamper the productivity of crops. This includes delivery of proven technologies to beneficiaries and development of appropriate R4D technologies to address new emerging threats,” he said.

Partners speaking at the event congratulated IITA for achieving this major milestone as they also noted some of its successes.

The Minister of Agriculture, Food Security and Livestock, Hon Dr Charles Tizeba, in a speech read on his behalf by Ms Nkuvililwa Simkanga,  Director for Policy and Planning, congratulated IITA for this important milestone and its efforts in finding sustainable solutions to some of the critical challenges facing smallholder farmers in the country. These include lack of access to improved varieties, lack of modern agriculture production skills and knowledge, and attack by pests and diseases and postharvest losses.

“I take this opportunity to applaud IITA on the various successes it has had in addressing the challenges faced by smallholder farmers. From developing improved varieties of major crops such as cassava and banana and spearheading efforts to commercialize agriculture,” he said.

He noted that 20 improved varieties of cassava that are high yielding and disease resistant had been released in Tanzania in the last 10 years from efforts by IITA and the national breeding team.

This news was originally published on the IITA website.