FAO's SOFI now out, with new focus on Nutrition 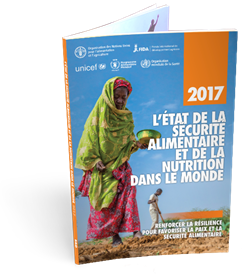 After steadily declining for over a decade, global hunger appears to be on the rise once more, with multiple forms of malnutrition threatening the health of millions.

The State of Food Security and Nutrition in the World warns that the greater number of conflicts, whose impacts are often exacerbated by climate-related shocks, is one of the main drivers behind this shift. This is threatening to derail the international commitment to end hunger and all forms of malnutrition by 2030.

The report also examines the ways in which food insecurity can trigger conflicts, and provides valuable insights into how food security can help prevent the outbreak of unrest and violence.

Thanks to the collaboration of five UN agencies, with WHO and UNICEF joining IFAD, WFP and FAO, this report is a first step towards a comprehensive global analysis of the links between food security and nutrition.

A recording of the launch on 15 September can be accessed here.

FAO is due to release five Regional Overviews of Food Security and Nutrition, providing more detailed analysis of progress and setbacks in Africa, Asia and the Pacific, Europe and Central Asia, Latin America and the Caribbean, and the Near East and North Africa.