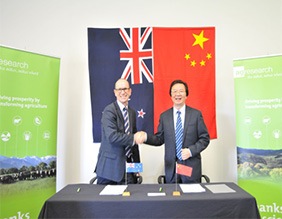 During the visit and discussion, the delegation also gained an in-depth understanding of the respective measures taken by the three countries in setting up the scientific research system, layout and the management mechanism reform in response to the global agricultural challenges, the scientific support provided by national level scientific research institutes to the nation’s industry development and restructuring, scientific research and industrial development evaluation system, and support and division of labor contributed by government and businesses. New results and developments in the sense of original agricultural innovation and the priority requirements for initiating collaboration with China in the agricultural sector were also among the query for understanding.

The delegation also held talks with Chinese students studying in University of Tasmania and Massey University in New Zealand, introduced the overall situation of CAAS and its discipline setting, output of scientific research and project planning for young talents, hoping that they would exert their intelligence after finishing their study back to China.

Relevant personnel from the General Office, Department of International Cooperation, Institute of Agricultural Resources and Regional Planning, Institute of Animal Sciences as well as Harbin Veterinary Research Institute of CAAS accompanied the visit.