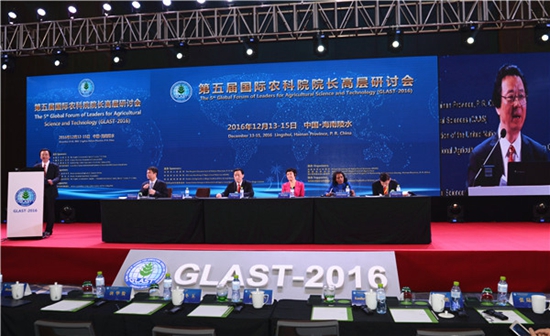 With the theme on “Eliminating poverty and hunger through S&T innovation”, the two-day forum provided a platform for participants to exchange ideas, shared experiences in poverty reduction through S&T innovation, and finally reached a consensus by releasing “Lingshui Declaration”. All the participants strongly appeal that scientific and enological innovation is vital for sustainable agricultural development, and is therefore critical to global food security and poverty elimination. The meeting particularly focuses on aiding small farmers in meeting market demands by enhancing S&T transformation and adopting in poor regions through innovative and context-specific approaches. It also fully recognized that to establish a long-term collaboration mechanism is critical to meet the emerging agricultural challenges in the rapidly changing globalization era, contributing to global extreme poverty eradication and overall poverty reduction by 2030, as stated in the UN 2030 agenda for sustainable development.

Qu Dongyu, Chinese Vice-minister of Agriculture pointed that, the Chinese government has always attached great importance to the elimination of poverty and improving people’s daily life by applying agricultural science and technology. “History and data show that science and technology have provided solid support in reducing hunger and poverty in the world”, Qu said, citing the success of 86-year-old Chinese academician Yuan Longping as an example. Yuan, commonly known as “the father of hybrid rice” in China, recently achieved an annual out-put of 1,537 kilograms per mu (0.067 hectare) for his double-season super rice this year, breaking the current world record of 1,500kg. Under the challenges of larger population yet shrinking land, Chinese horticultural scientists, represented by academician Fang Zhiyuan, have broken through the critical technology in facility vegetable production, by having developed balanced producing methodology of vegetables against the restriction of regions and seasons, which greatly meet the needs for vegetables of urban and rural residents.

“China is willing to share with all other countries its experience and development in the application of science and technology to promote agricultural growth and eliminate poverty,” said Qu.

Tang Huajun, President of CAAS, said that with the accelerating pace of Chinese Agricultural S&T innovation, the contribution rate of S&T has reached over 56% so far, which effectively guaranteed the supply of main agro-food. The self-sufficiency of main stable food particularly rice, maize and wheat reached 98.1%, enabling Chinese people firmly “hold the bowl by their own hands”, therefore greatly contribute to global food security. Tang stressed that science and technology have proven to be effective weapons in the fight against poverty. CAAS has launched the State-level Agricultural Science and Technology Innovation Programme (ASTIP) and established a National Agricultural Science and Technology Innovation Alliance with other peer institutes, according to Tang. “CAAS is willing to cooperate with partners, international groups and the private sector around the world to introduce and exchange science and technology in a bid to further reduce poverty on a global scale,” said Tang.

Initiated by CAAS with FAO and CGIAR as sponsors in 2006, GLAST is a high-level conference involving worldwide leaders in agricultural S&T. The 4 previous sessions were themed on “Agricultural S&T- challenges and prospectives”, “Modern agriculture and new countryside construction”, “food security”, “Agricultural S&T transformation and industrialization”, GLAST has become a platform for leaders and scientists to exchange ideas, share experience and developing solutions to global food security, with numerous consensuses in agricultural S&T have been reached.

This news item originally appeared in the December 2016 newsletter of CAAS, a Partner in GFAR.